Since November 26, the struggle of the workers of VIOME in Thessaloniki for self-managing the factory they occupy is under threat from an auction process. A judge gave permission in March 2015 to the state-appointed “trustee” of bankrupt FILKERAM, the parent company of VIOME, to proceed with an auction of the movable assets of the company as well as its real estate property, which includes the premises of VIOME.

The workers of VIOME have a long-standing demand towards the authorities to separate the plot of land of VIOME from that of FILKERAM, so the former is expropriated and granted to the workers in order to go on with their successful endeavour in self-managed production of natural detergents, and the latter is liquidated in order to satisfy the creditors of parent company FILKERAM, among them hundreds of workers. Unfortunately, lack of political will on behalf of the executive power and collusion between judicial authorities and business interests have allowed the situation to come to this point. 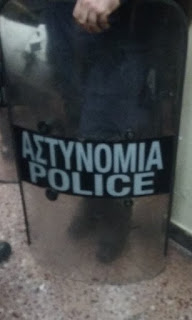 Today, Thursday December 17, has been the fourth time in 4 weeks that the threat of liquidation was averted. Energetic intervention of the VIOME solidarity movement, as well as the general strike mobilisations, achieved the cancellation of the 3 previous auctions. However, today the solidarity movement arrived at the courthouse to find the corridors of the auction court cordoned off by police in full riot gear. There were moments of tension and insults by the police, as the solidarity movement denounced the illegality of blocking a public auction process and demanded to meet the attorney.

Although the police presence prevented the bulk of the solidarity supporters to approach the site of the auction, the mass mobilization allowed them to negotiate the presence of delegates of the VIOME workers and solidarity members in the auction hall, to ensure that the auction does not involve any of VIOME’s property.
Around 13.00 the auction started and the workers of VIOME made sure that there was no offer for the acquisition of the real estate property, but only of low-value movable assets of parent company FILKERAM, such as chairs, desks and printers. Hundreds of solidarity supporters were standing by along the police lines, ready to react in case there was an attempt to auction off the real estate property. Luckily, they didn’t have to intervene, as the presence of riot police in such a narrow corridor could have had disastrous consequences.

There is one more auction taking place in the new year; if this is cancelled or there is no interested buyer, another court decision is required to lower the starting price. This development would delay the process of liquidation and it would allow the workers of VIOME some breathing space, in order to step up the struggle and demand the cancellation of all auctions and the expropriation of the land of VIOME, so it can be self-managed by workers and society.

With another threat averted, the workers of VIOME can smile again and go back to carrying out their activity. Last week they proudly announced the incorporation of 3 more workers in the cooperative, two chemical engineers and one IT specialist. The process of improving the formulas of the products is accelerated, and the export network of the high quality soap to European countries is constantly expanded.

But the activity of VIOME is not all about production and the subsistence of the workers. Over the past month, a warehouse at the VIOME factory has been turned into a point of storage and transshipment of first necessity items (clothes, sanitary items, baby food) gathered by solidarity collectives all over Greece, before they are transported to the Eidomeni border, where the stance of the authorities has created a huge humanitarian crisis, with thousands of refugees trapped in inhuman conditions. The social movements are in the first line of alleviating the suffering of the people fleeing hunger and wars, at the same time that they demand an end to the absurd immigration policies that hold these people hostages. VIOME is an organic part of these efforts and it supports politically all of society’s initiatives to provide solutions to the refugee crisis, such as the occupation of “Orfanotrofeio” an abandoned orphanage that was turned into a self-managed shelter for refugees and migrants by the social movements in the past few weeks in Thessaloniki.

Furthermore, on Sunday, December 20, VIOME in close collaboration with the militant healthcare professionals of Thessaloniki’s Social Solidarity Clinic are inaugurating a “Workers’ Clinic” within the premises of VIOME, specially equipped to provide free primary health care to uninsured workers of the adjacent industrial and commercial areas. The dismantling of public health care by a series of neoliberal governments can thus be confronted through solidarity. The inauguration will be accompanied by a farmers’ market, a folk music concert, and food and wine for everyone present.

This is just another reminder that in this new conception of labour that the network of European recuperated companies in Greece, Italy, Turkey, France, Croatia and Bosnia bring forward, the factory is not a private space to serve the interests of the few at the expense of the many. Rather, it is a vibrant space of encounter and activity for a wider community to meet its needs of food, healthcare, education and socialisation, and to counteract the attack of capital on the popular classes.

The workers and the solidarity assembly of VIOME would like to thank all our brothers and sisters abroad who have expressed their support and solidarity by signing the resolution, protesting at the Greek consulates and embassies, and organising dozens of informative meetings and screenings of the latest documentary on the struggle. United we stand strong, in our fight for a world of justice, freedom and self-determination!

Solidarity is our weapon! Messages of support to VIOME from around the planet

Deionized water in ALL the Viome products

Real-time information from the direct action to prevent the auction of the premises of VIOME, in the courthouse of Thessaloniki