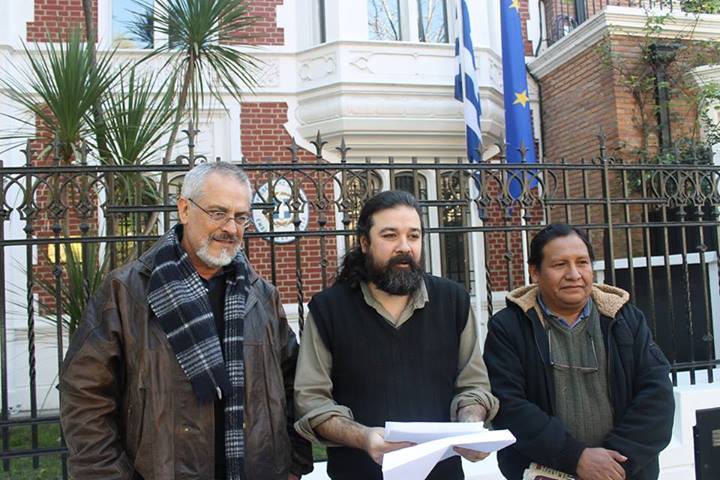 On the 26th of June, as part of the International Day of Solidarity with the workers of Vio.Me. in their struggle for self-management of their workplace, many solidarity actions were carried out in Argentina, a place with a great tradition of struggle for self-management. A petition signed by many workers and unions was delivered to the Greek Embassy in Argentina by representatives of three workers’ cooperatives that have a long history of struggle: 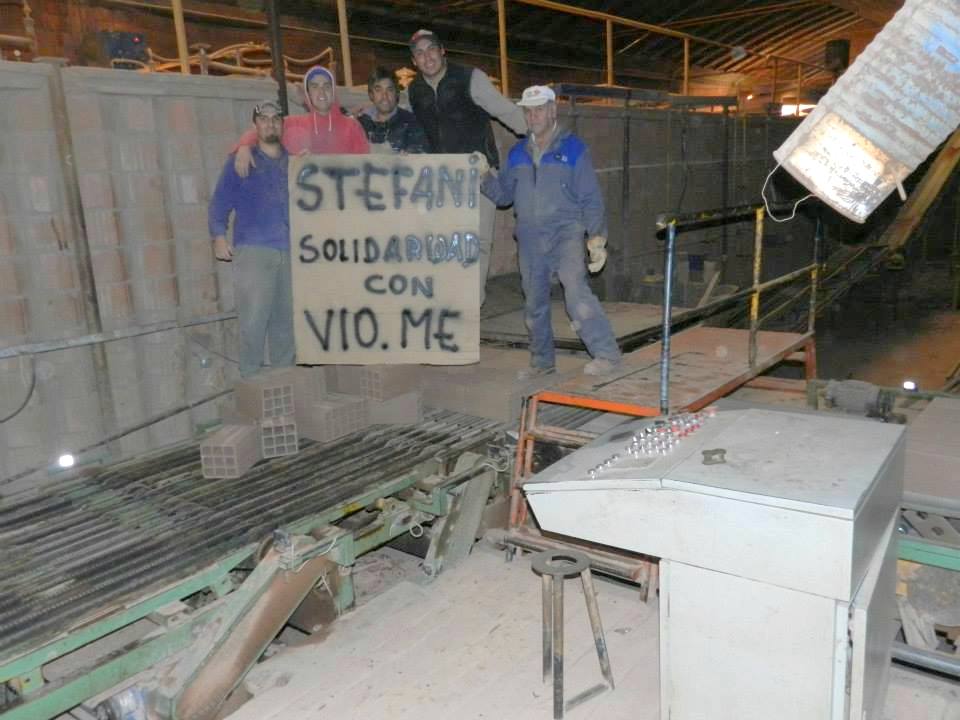 – BAUEN, a hotel on the heart of Buenos Aires operated by its workers,
– Brukman (Cooperative December 18) self-managed by workers in the textiles sector,
– ChilavertPrinting Workshop, under cooperative workers’ management. 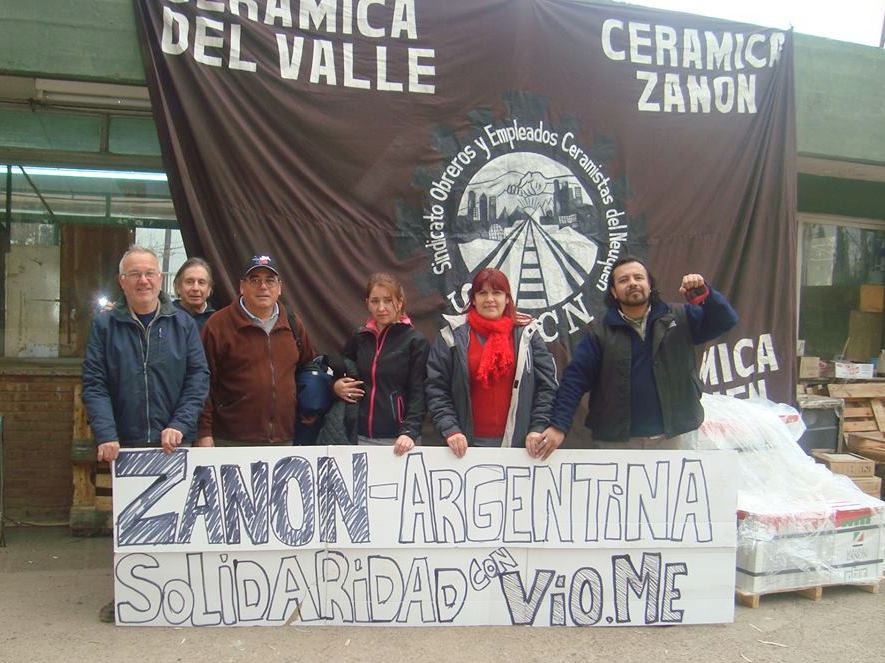 The text stated:
“In the midst of a capitalist crisis of historic proportions that is leaving millions unemployed worldwide, the workers of Vio.Me. are resisting unemployment, while at the same time promoting an alternative coming from the workers themselves.
The undersigned declare our wholehearted solidarity with their struggle, and we demand that the authorities guarantee the rights of the workers of Vio.Me. to work, produce and sell their products. We declare our unconditional support for their struggle. “ 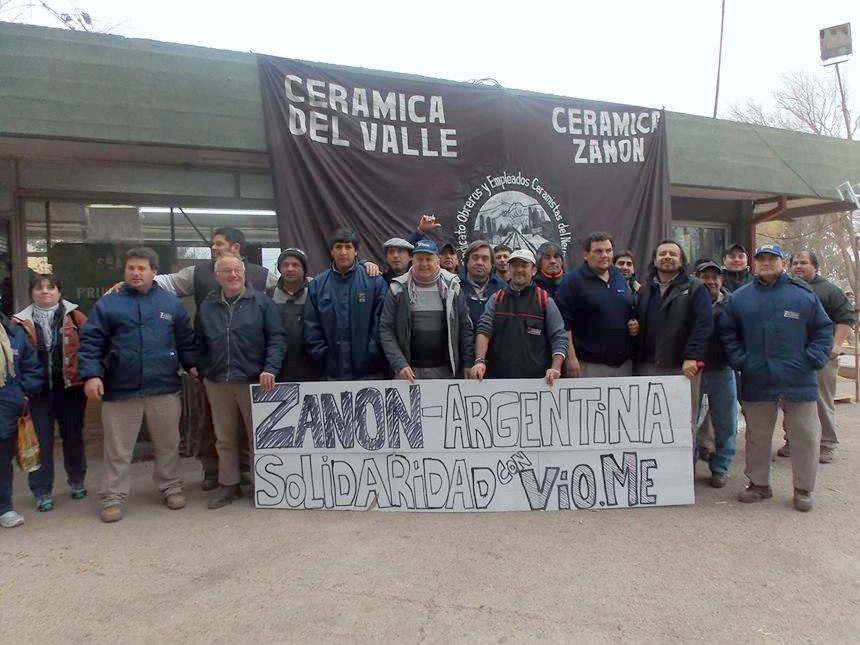 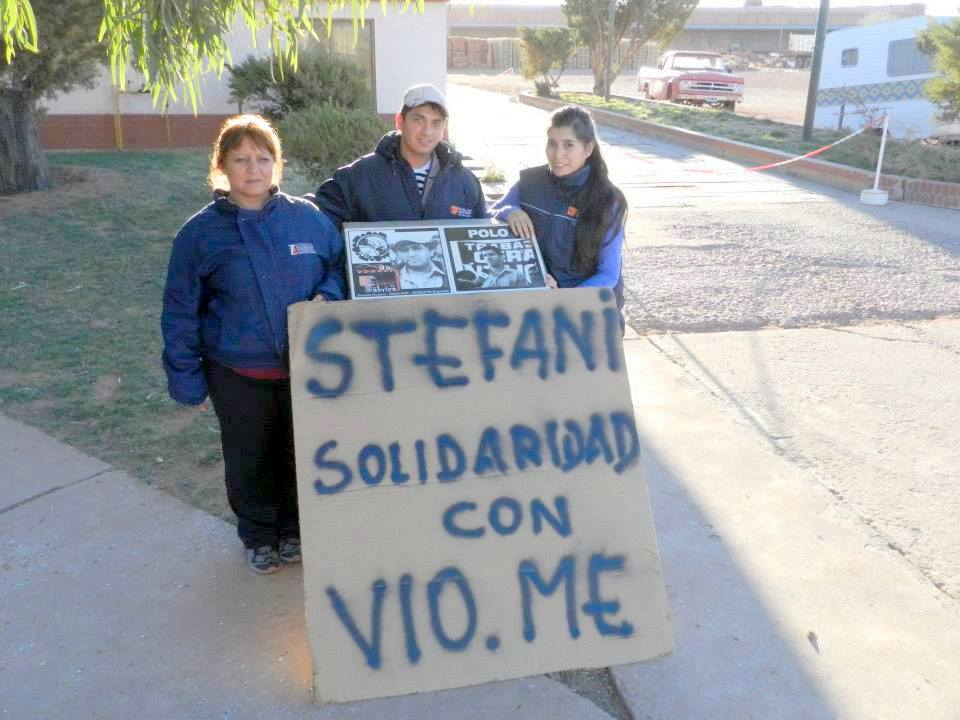 Moreover, the workers of Stefani Ceramics, another workplace in struggle for self-management, have sent their greetings and solidarity through photographs.
So did the workers of Chilavert Printing Company, as well as those of Zanon / FaSinPat, supporting the petition and declaring that the struggle of Vio.Me is also their struggle.

The latter also sent this message to their Greek comrades:

“Brother and sisters at Vio.Me, 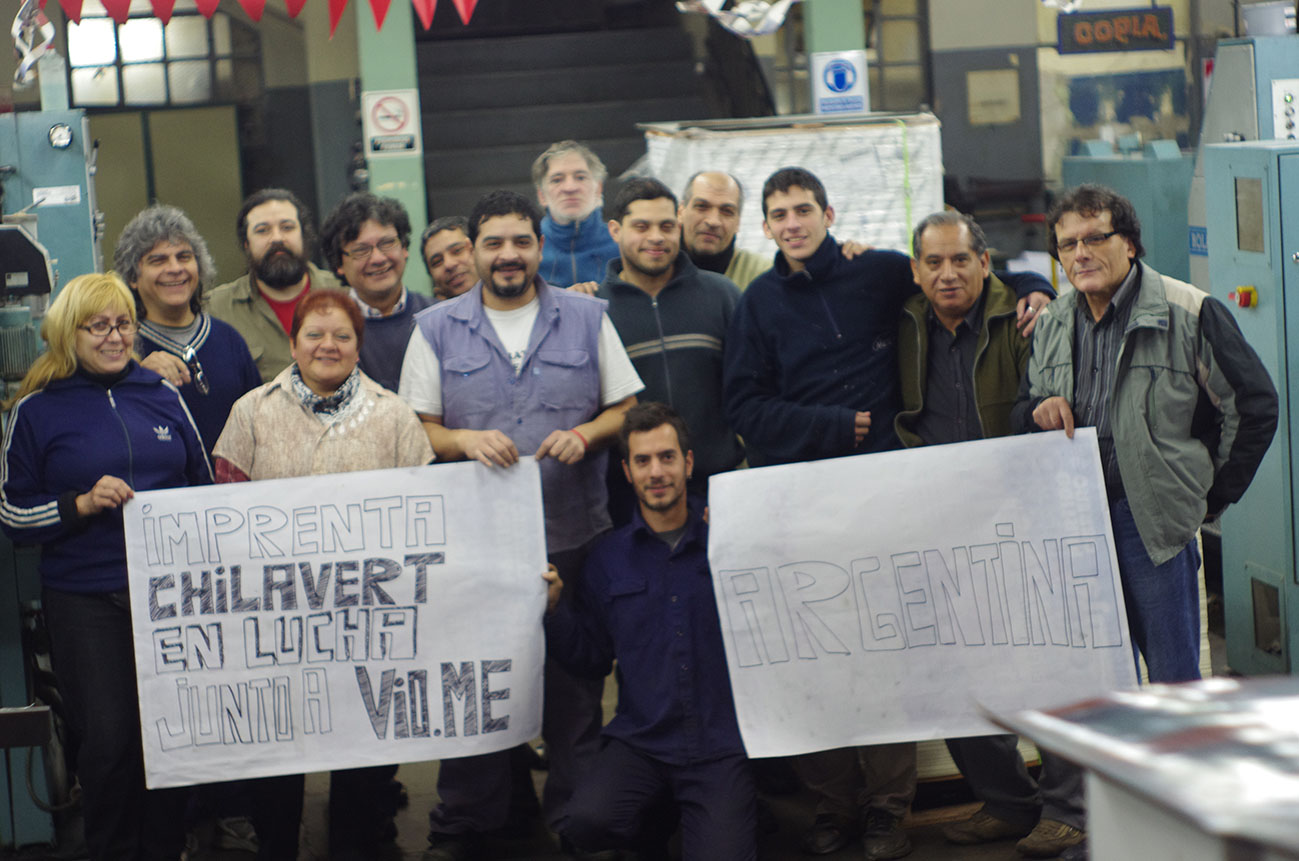 Us at Zanon, the Ceramist Union and the Workers’ Bank, are declaring our solidarity with your struggle and we are taking part in the actions carried out today, where not only will you showcase your production but you will also demonstrate once again the ability we have as workers to run the factories without bosses, at a time when the capitalist model is under question and employers want us workers to pay for the crisis. We send our greetings and hundreds of hugs from the distance that separates us, keep in mind that on this side of the ocean there are workers that support you.
Long live the struggle of the workers of Vio.Me!!”
Germany: 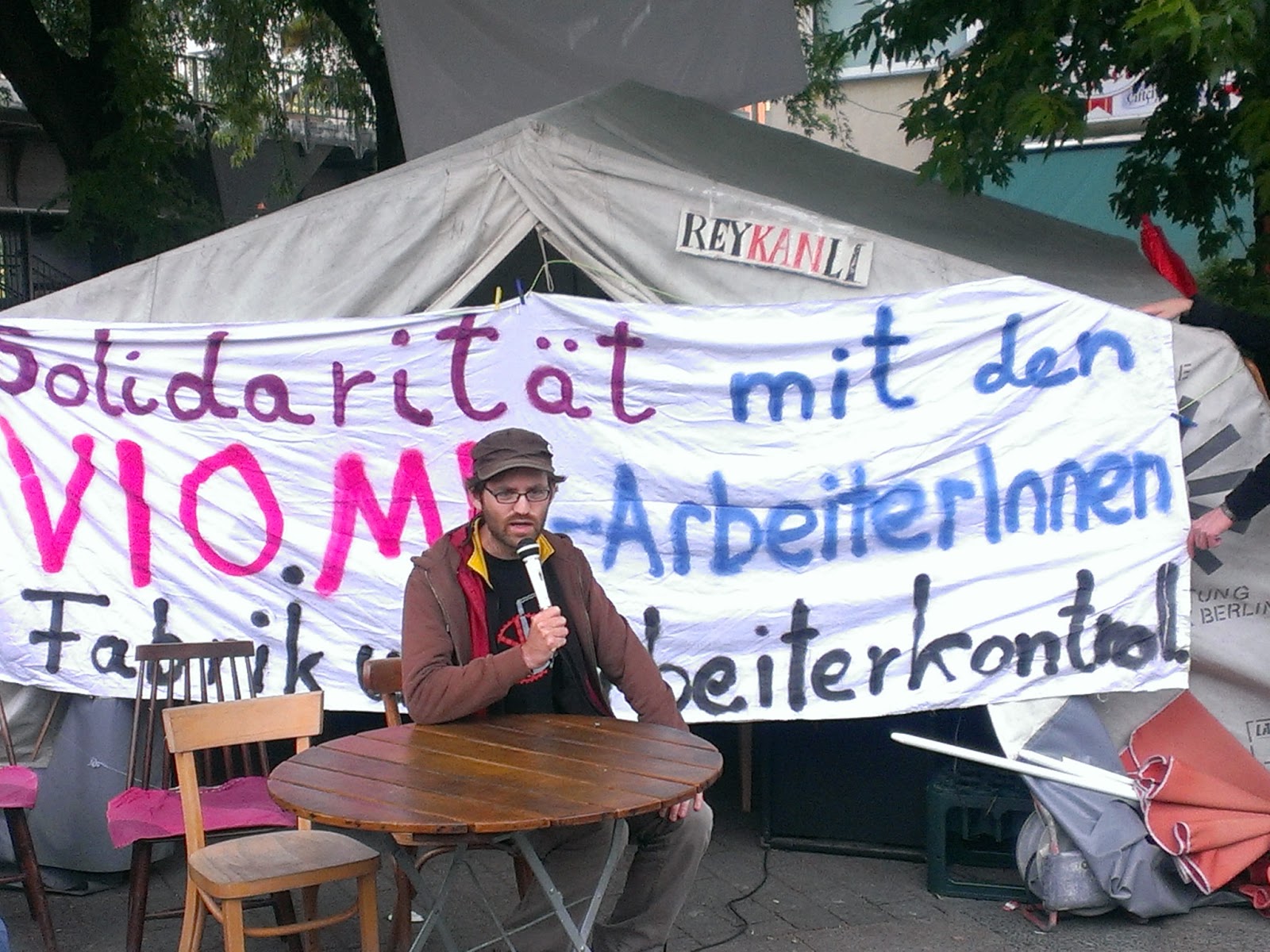 German, Turkish and Greek comrades held a solidarity rally to support the struggle, calling for a united solidarity effort for all the struggles in Southern Europe and worldwide and referencing the example of Vio.Me. as part of a workers’ answer to the current capitalist crisis. A talk about the current situation followed. The banner in the background reads: “Solidarity with the VioMe workers, factory under workers’ control”.

Click on the link below to see actions from Germany, Italy, Spain, France, Belgium, Bulgaria. 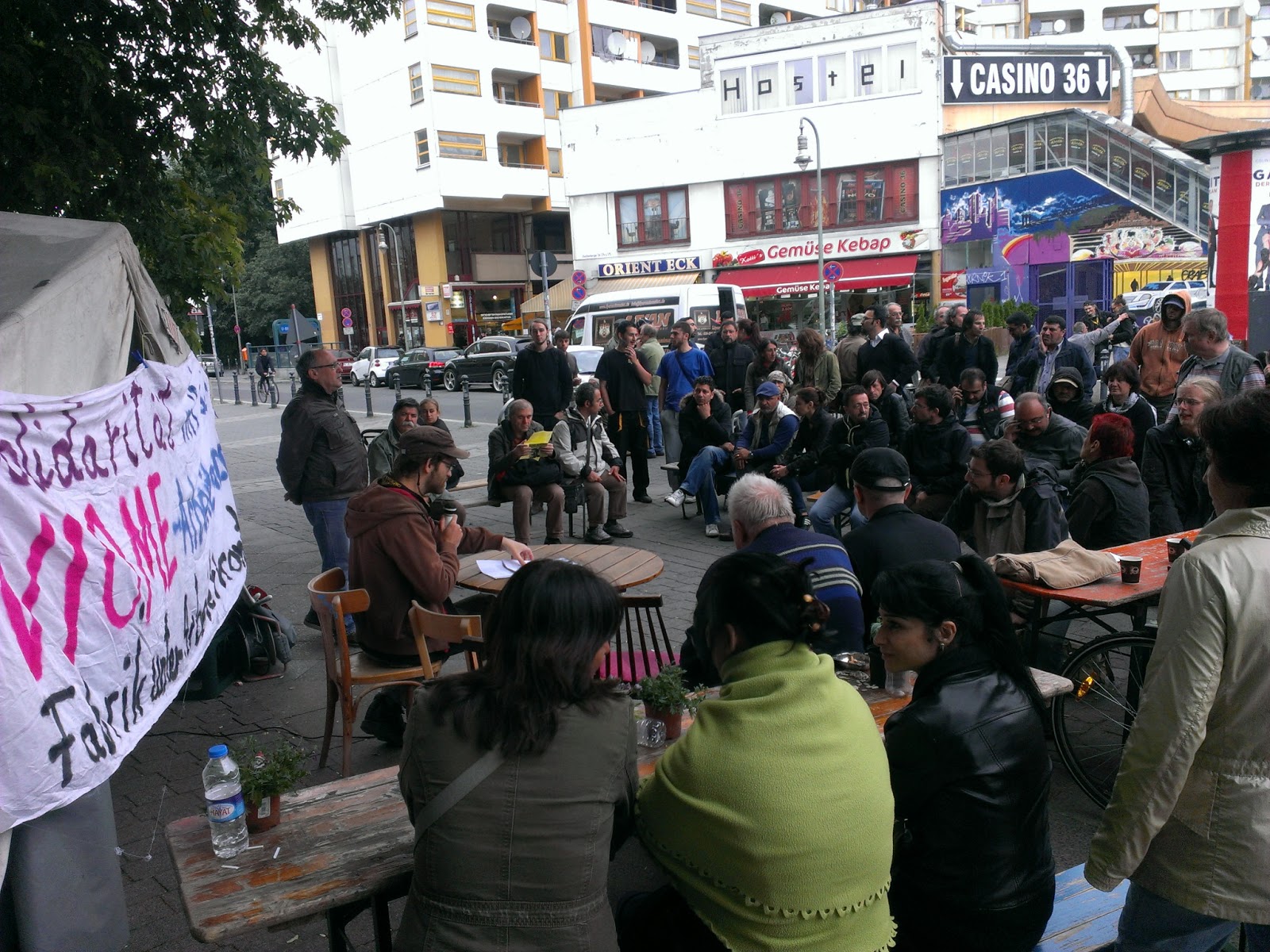 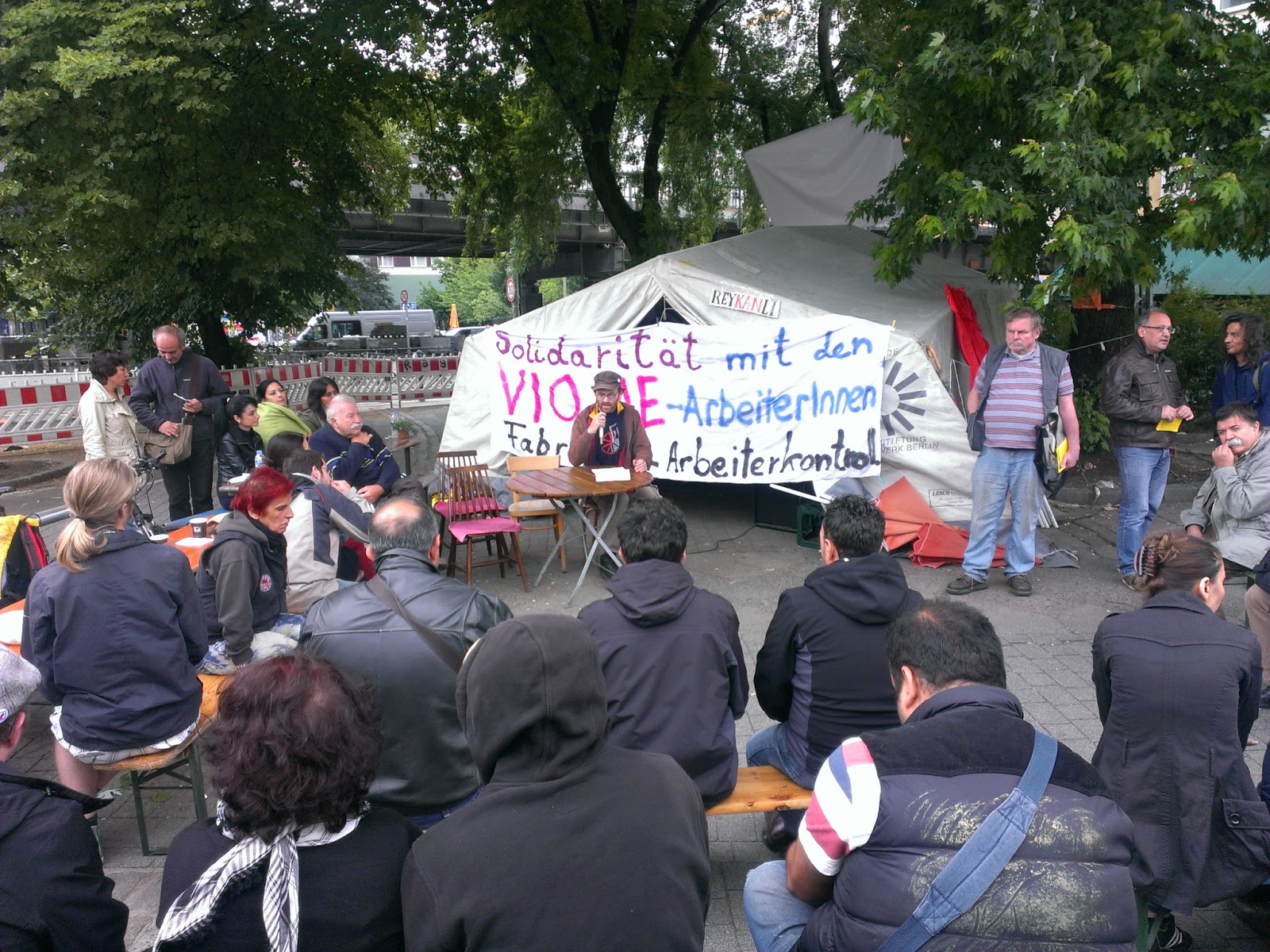 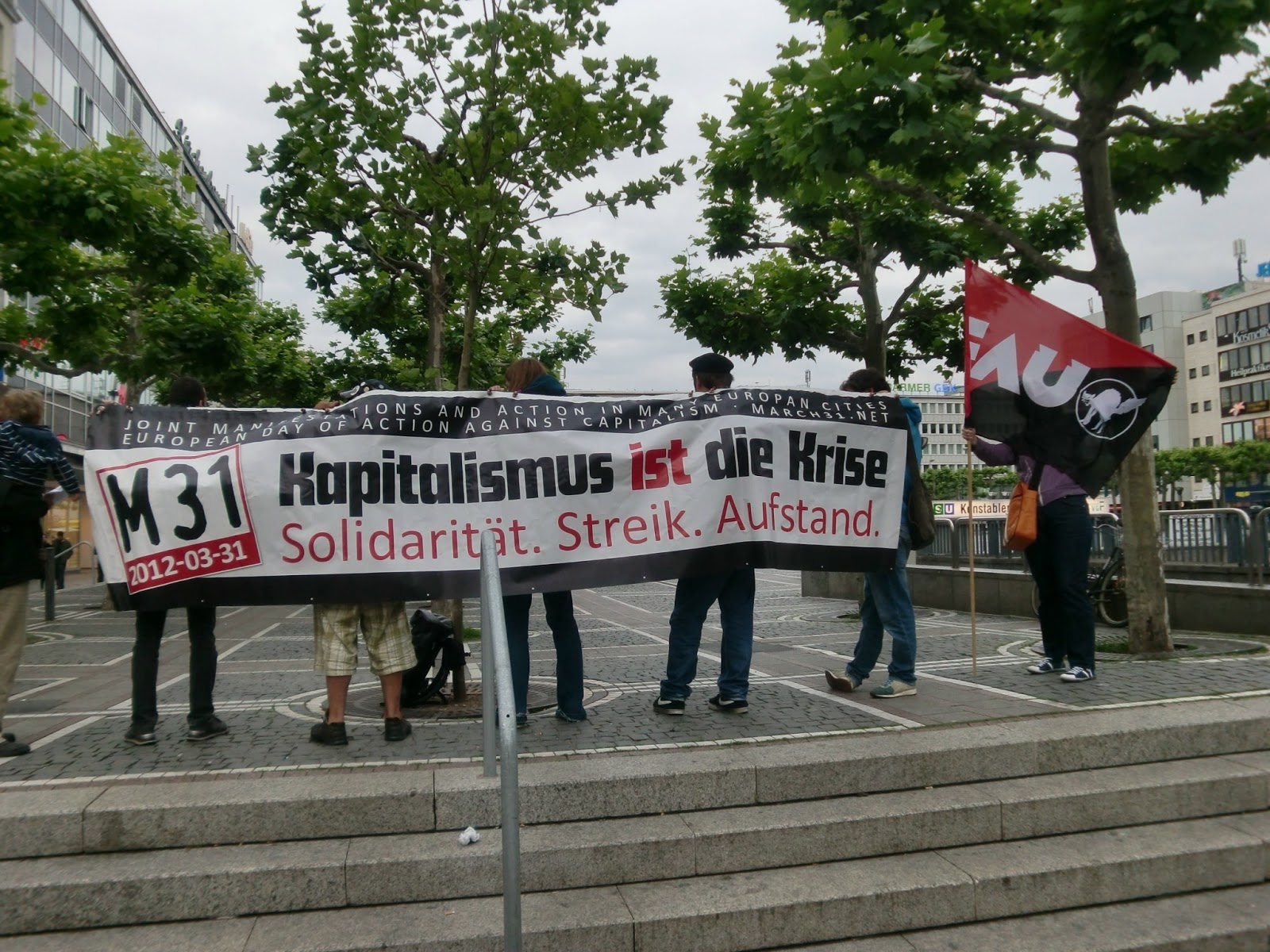 The Crisis Alliance, an association of antinationalist and
anticapitalistic groups, held an event at a central square in Frankfurt on
June 26 in solidarity with the Vio.Me. struggle for self-determination. At about
15 People got together at 19 o’clock in the city centre, while people were
still out shopping, to make the open call of the workers of Vio.Me. public.

The appeal for a day of solidarity was read several times with a
megaphone in German and handouts with the translated appeal were distributed  to
shoppers while a banner of the M31 network, of which
the Crisis Alliance is part, was held, which states: 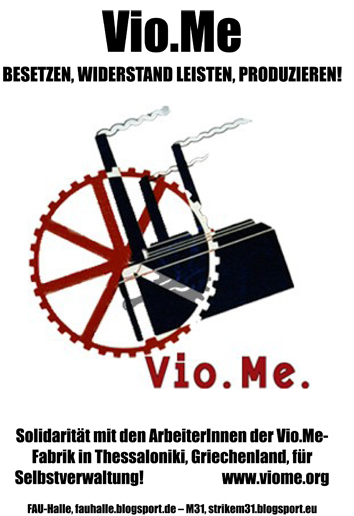 Passers-by stood and listened, asked questions and engaged in discussion about
what self-determination and self-empowerment means.

Halle:
A leaflet in favour of the Vio.Me struggle was handed out by the local chapter of the FAU union. 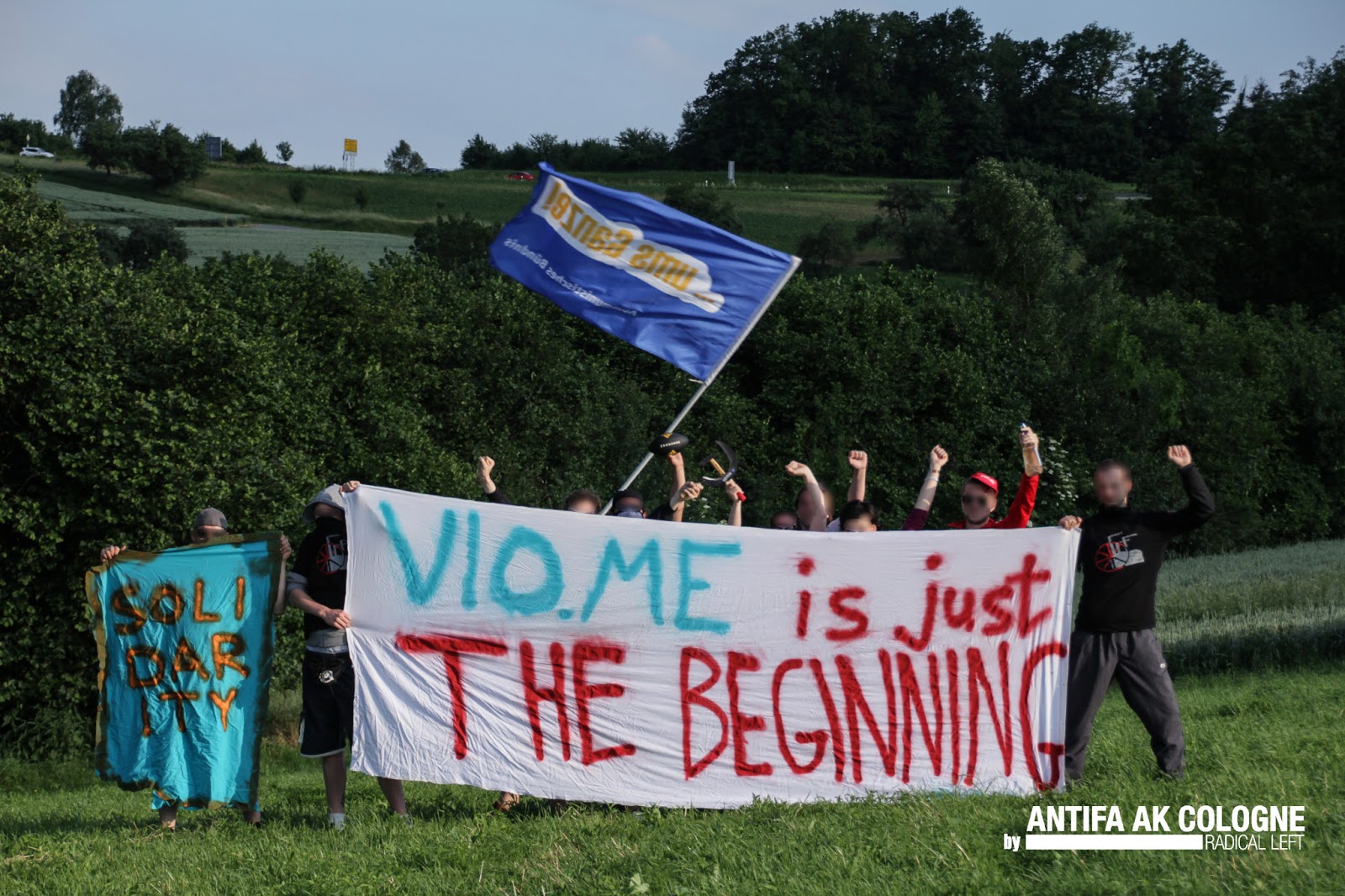 A banner that stated “Vio.Me. is only the beginning” was raised in Köln. 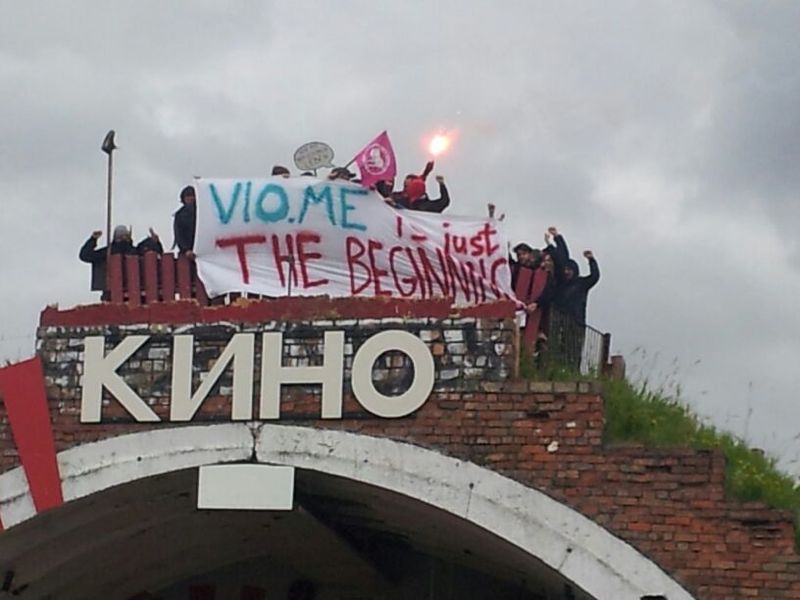 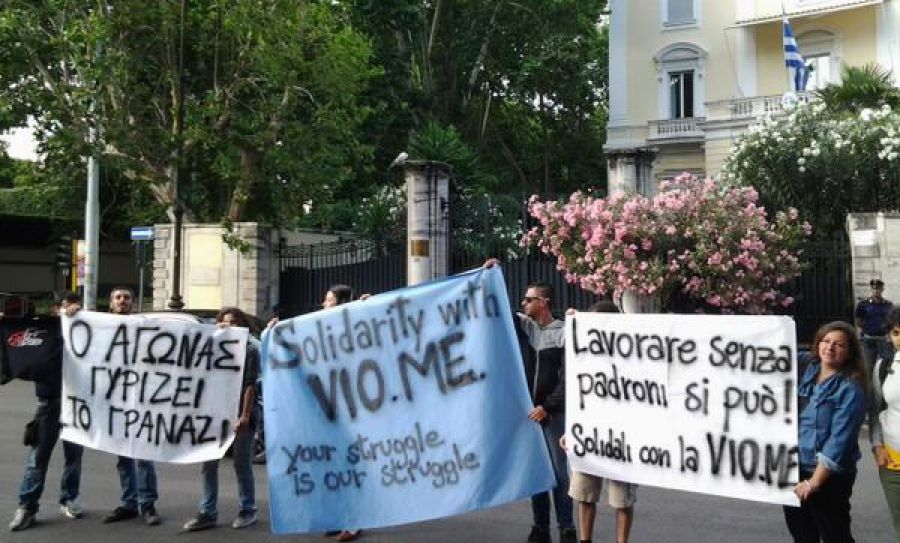 On Wednesday 26 of June, Zero Factory (a factory of Rome where the workers are trying to restart the production under self-management) answered to the call for solidarity of the workers of Vio.Me., supporting their struggle  for the unrestrained operation of the factory.
They held banners in front of the Greek embassy with the following slogans: “The struggle moves the gear”; “Solidarity with Vio.Me. – Your struggle is our struggle”; “Working without boss is possible”. Production in the hands of the producers and factories in the hands of the workers!
Workers self-management and grassroots direct democracy!
They also sent to the Greek ambassador the below letter: 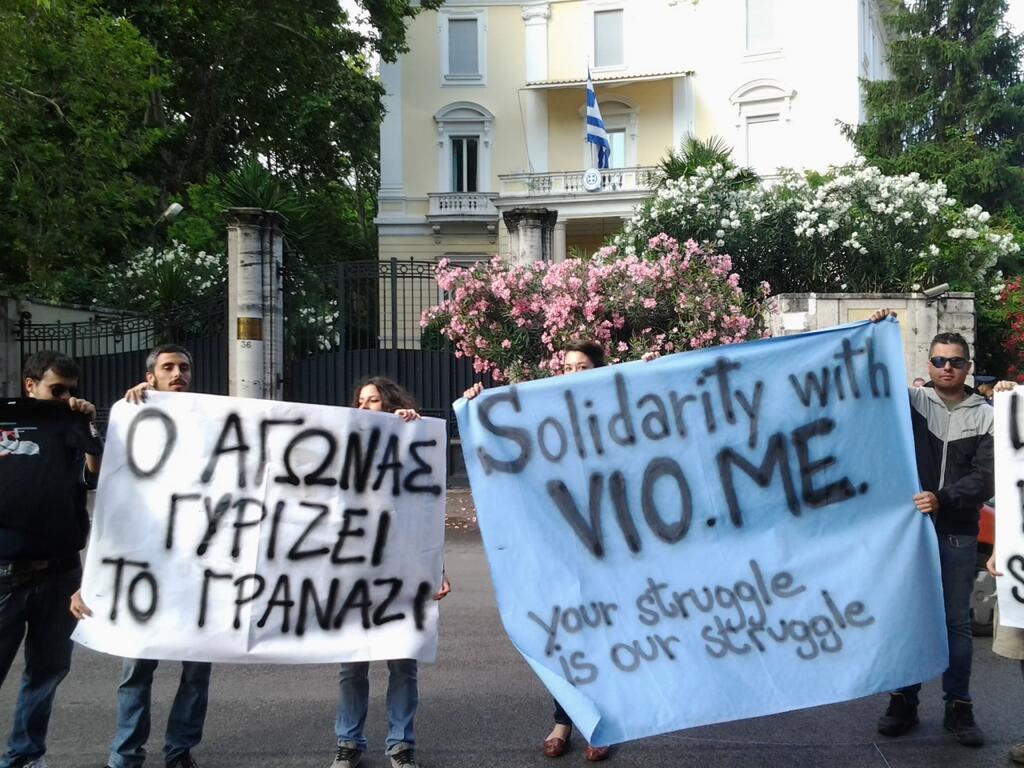 “Dear Mr. Themistoklis Demiris, Greek ambassador in Italy
Dear Mr. Antonis Samaràs, Prime Minister of Greece,
We are blue-collar workers, students, precarious and autonomous workers. We address you with this letter to answer the call for international solidarity made for today, Wednesday 26 of June 2013, by our brothers and comrades of the Vio.Me. self-managed factory of Thessaloniki. In May we met and hosted the workers and the Open Initiative of Solidarity with Vio.Me. in Rome during their tour here in Italy. We met and compared our experiences of struggle and resistance.
The workers of Vio.Me. needed to ask for international support because the Greek government doesn’t want to legalize this self-managed activity. Even if in Greece the unemployment rate continues to increase, marking historical records, the government places every kind of obstacle against this precious and winning experiment. Indeed, instead of supporting the workers of Vio.Me. politically and economically, the government tries to strangle them financially, denying to legalize their production.
On which side does the Greek government stand? On the side of unemployment, of misery, of hunger or on its population’s side ?
The experiment of the Vio.Me. workers represents a concrete way out of this crisis: it’s possible to really exit this crisis by just transforming the political, social and economic model that produced it radically.
Also in Rome there is a similar experience: since the 1st of June 2013 blue-collar workers, students, precarious and autonomous workers reopened the abandoned factory RSI (ex Wagon Lits), to restart and convert the production. After one year and half of occupation and after the bankruptcy of the company, a group of ex-employed together with a wide social coalition decided to retake the factory to produce in self-management and without bosses. This factory of train maintenance was renamed Zero Factory.
The workers of Vio.Me. are not alone. All over Europe and all over the world many people and groups are occupying factories, theatres, hospitals to self-manage the production and the essential services. For this reason, in Greece and all over the world many demonstrations of solidarity and support to the Vio.Me.’s workers took place. In the day when for the first time they will publically distribute the products made under the workers’ full control, also here in Rome we want to show our solidarity and our support. Their production shows concretely that to produce without bosses is not just possible but useful. Their struggle is our struggle!
When the crisis hits us in the most violent way it’s the moment to use all the tools we have: creativity, solidarity, self-management of the means of production. These principles point to the only real alternative to the crisis we are living, to the misery and to the poorness that they are trying to impose us.
We demand the unrestrained operation of the Vio.Me. factory under self-management and full workers’ control. We demand the immediate legalization of its operation.
Production in the hands of the producers and factories in the hands of the workers! Workers self-management and grassroots direct democracy! Workers, students, autonomous and precarious workers – Rome, 26 of June 2013″

France:
In France a letter campaign was launched, directed to the Greek embassy. Many citizens sent the following letter to the Greek ambassador in Paris:
Dear Mr. Ambassador,
The employees of the company of Thessaloniki Vio.Me., formerly a subsidiary of Johnson Philkeram group have not been paid for two years. They have consequently occupied the factory and started production of environmentally friendly household products since February 2013.

Given the abandonment of the company by its former owners, and wishing to stabilize and regulate their activity, the 38 workers have agreed to maintain the operation as a workers’ cooperative. To achieve this, they ask to receive a special unemployment benefit, the regularization of their activity and the concession of the premises to the cooperative.

In the condition of high unemployment the EU is currently facing , such an effort cannot be ignored and that is why I ask you, Mr. Ambassador, to communicate to the competent authorities in your country that I support the initiative of the former employees of Vio.Me. and their demand for regularization. 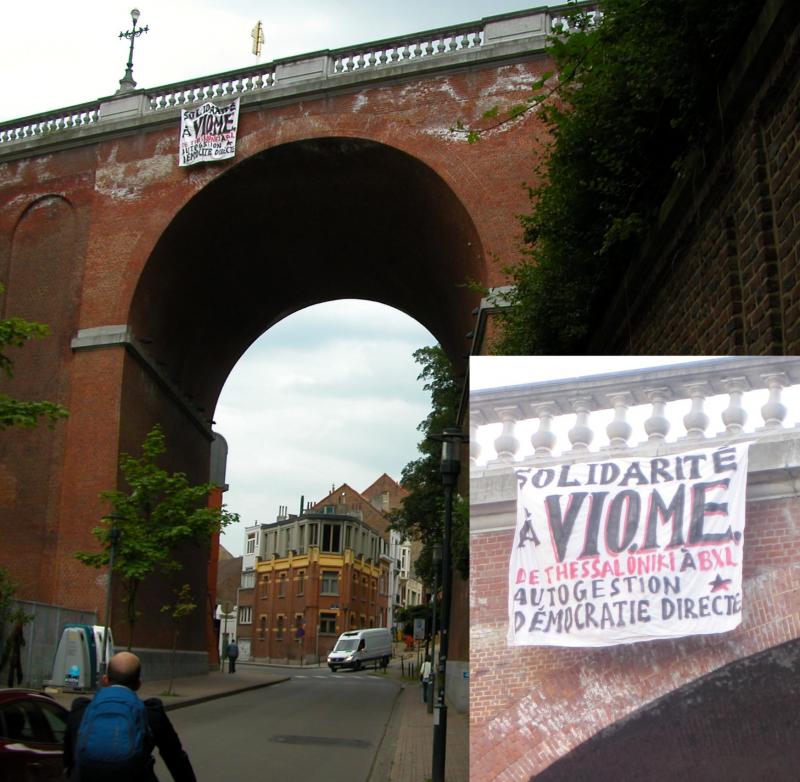 Belgium:
In Brussels, a banner was hung stating:
“Solidarity with Vio.Me. of Thessaloniki in Brussels. Self-management, direct democracy” 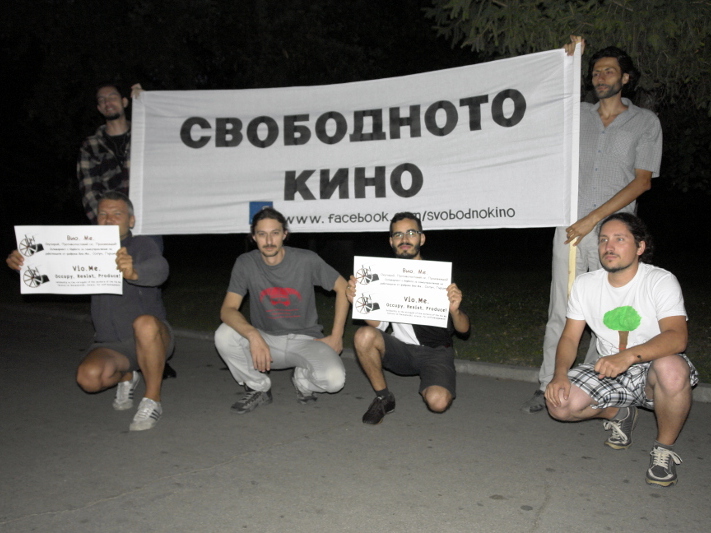 A public event was organised and banners in favour of Vio.Me were held. 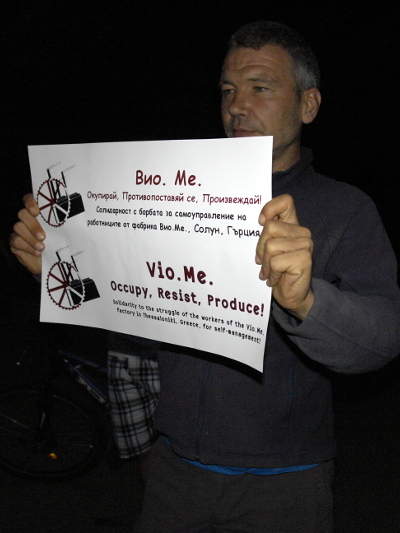 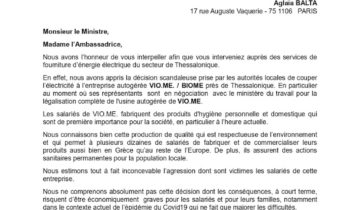