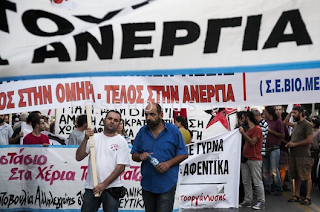 With unemployment climbing to 30%, workers’ income reaching zero, sick and tired of big words, promises and more taxes, unpaid since May 2011 and currently withholding their labour, with the factory abandoned by the employers, the workers of Vio.Me. by decision of their general assembly declare their determination not to fall prey to a condition of perpetual unemployment, but instead to struggle to take the factory in their own hands and operate it themselves. Through a formal proposal dating from October 2011 they have been claiming the establishment of a workers’ cooperative under full workers’ control, demanding legal recognition for their own workers’ cooperative, as well as for all the others to follow. At the same time they have been demanding the money required to put the factory in operation, money that in any case belongs to them, as they are the ones who produce the wealth of society. The plan that was drawn up met with the indifference of the state and of trade union bureaucracies. But it was received with great enthusiasm by the world of the social movements, which, through the creation of the Open Initiative of Solidarity in Thessaloniki and afterwards with similar initiatives in many other cities, have been struggling for the past 6 months to spread the message of Vio.Me across society.

The workers cannot wait any longer for the bankrupt state to fulfil its gratuitous  promises of support (even the 1000-euro emergency aid promised by the Ministry of Labour was never approved by the Minister of  Finance). It’s time to see the Vio.Me. factory –as well as any other factory that is closing down, going bankrupt or laying off its workers- reopened but its workers, and not by its old or new bosses. The struggle should not be limited to Vio.Me., in order for it to be victorious it should  be generalized and spread to all the factories and businesses that are closing down, because only through a network of self-managed factories will Vio.Me be able to thrive and light the way towards a different organisation of production and the economy, with no exploitation, inequality or hierarchy.

When factories are closing down one after another, the number of the unemployed in Greece is approaching 2 million and the vast majority of the population is condemned to poverty and misery by the governing coalition of PASOK-ND-DIMAR, which continues the policies of the preceding governments, the demand to operate the  factories under workers’ control is the only reasonable response to the disaster that we experience every day, the only answer to unemployment; for that reason, the struggle of Vio.Me. is everyone’s struggle. 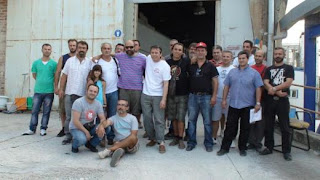 We urge all workers, the unemployed and all those who are affected by the crisis to stand by the workers of Vio.Me and support them in their effort to put in practice the belief that workers can make it without bosses! We call them to participate in a nationwide Struggle and Solidarity Caravan culminating in three days of struggle in Thessaloniki. We urge them to take up the struggle and organize their own fights within their working places, with direct democratic procedures, without bureaucrats. To participate in a general political strike in order to oust those who destroy our lives!

Aiming to establish worker’s control over factories and the whole of production and to organize the economy and society that we desire, a society without bosses!

Open Initiative of Solidarity and Support
to the struggle of the workers of Vio.Me.