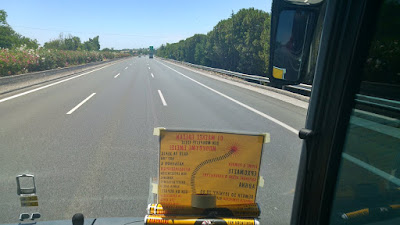 Workers of the occupied self-managed factories of Viome, in Thessaloniki, and Roben, in Veria, along with supporters from all over Greece, have started their “Caravan of Struggle and Solidarity” to Athens on the afternoon of Thursday 31 June, to protest the inactivity of the government and its unwillingness to legalise the operation of the two recuperated companies. 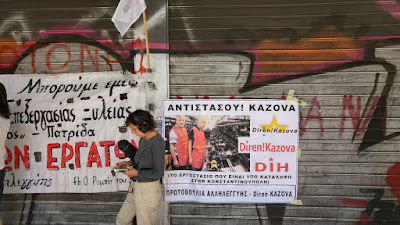 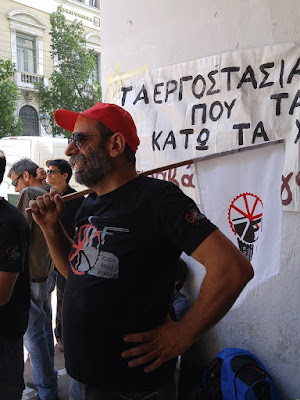 Despite the promises, the government led by supposedly “left wing” Syriza party, a declared supporter of the Viome struggle while in the opposition, not only is now burying its head in the sand regarding the demands of the workers, but also attacks them without provocation when they were about to set up their tents, to fulfil their promise of camping outside the Ministry of Labour until their demands are met.

A committee made up of delegates of the two factories and supporters from the social movements met with Vice-minister of Labour at 13.30 on Friday 1 July, and reiterated their demands of immediate and definitive cancellation of the Viome liquidation process, a guaranteed electricity and water supply for the factories, and the legalisation of the operation of the factories under the control of workers. The vice minister, once more declared a vague “support” fro the struggle and confirmed that the liquidation process could start immediately. In return the workers declared their intention to camp outside the ministry until they have a definitive answer on her behalf. 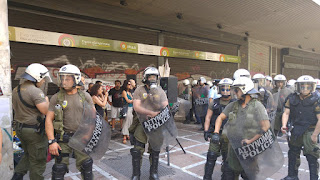 Less than ten minutes after the end of the meeting, while the workers and supporters were unpacking their tents, three platoons of riot police attacked without provocation, battered the protesters and used teargas against them. Two protesters were detained, among them one independent journalist who was covering the protest with his camera, despite declaring loudly his professional capacity as a journalist. Several protesters had cuts and bruises and some of them had to be taken to the hospital to receive stitches and treatment.

See the moment of the brutal unprovoked attack, as captured by the lens of independent media:

Another piece of evidence of the police brutality, riot police has circled protesters and they beat them arbitrarily without provocation. The government is responsible for this attack, it responds with violence to those who fight for dignity! 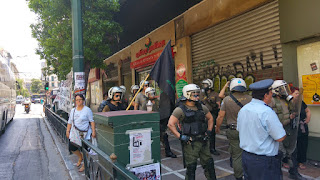 Also, below there is a video of the attack, ending with the moment of detention of the journalist, filmed by the journalist himself. It is evident that at the moment he was committing no offence, and that he was targeted in an attempt of the police to censor independent accounts of the events. He can be heard after the middle of the video shouting “I am a reporter” to the impassible policemen who drag him to the police van. 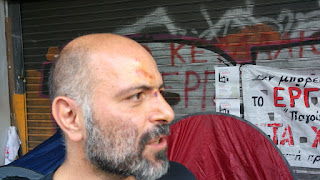 After moments of tension, the riot police left the place and protesters regrouped. The detained were released without charges. Finally the tents were set up and a big assembly was called.Workers and supporters denounced the cowardly attack, reminiscent of the worst days of repression of anti-austerity protests, to the media. 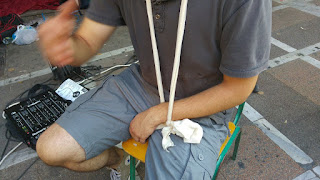 Injured protesters came back from the hospital in order to participate in the assembly. The plenary decided on maintaining the protest camp, reinforcing it with more volunteers and escalating the protest actions despite government repression.

The factories belong to society and to those who work in them! The workers are fed up with the empty promises and with the underhand ways of the government, Viome and Roben are staying in Athens, camped outside the Ministry of Labour, until their just demands are met!

The workers are not begging for any special privileges, they are simply demanding that the government stops siding with the powerful and that it respects all that was won by four years of struggle. They demand that the obstacles are removed for a genuine self-management of social needs by society itself. If they cannot do it, we can! 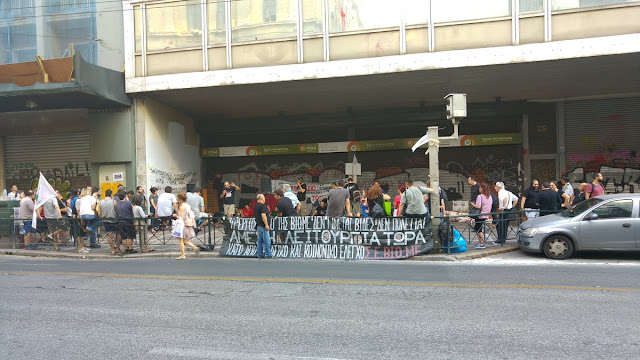 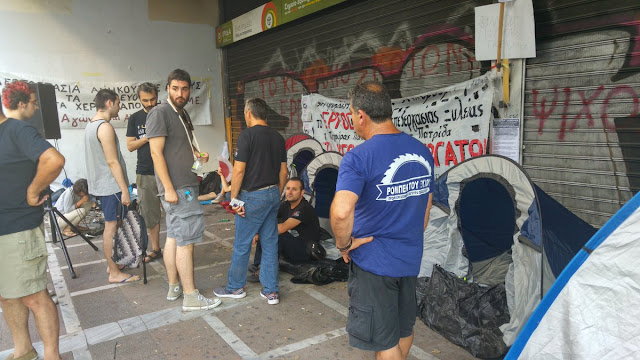 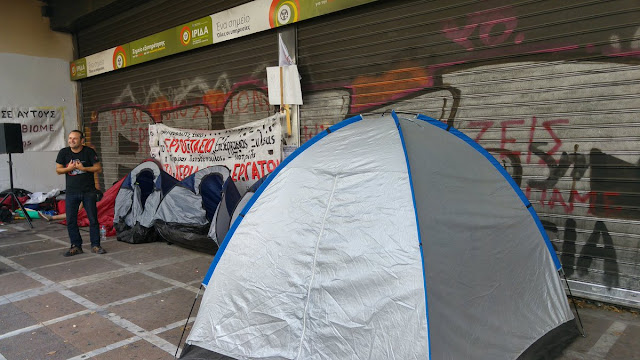 Together we can make the gear turn – Sign up as a solidarity supporter of Vio.Me. 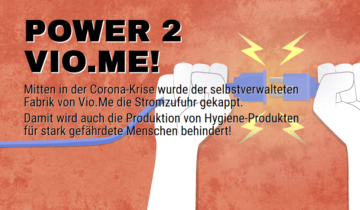